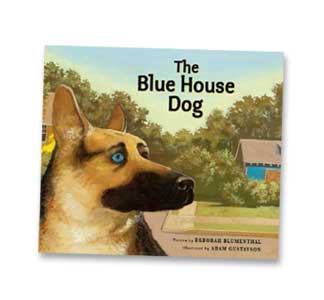 Today we have a lovely guest post from author Deborah Blumenthal.

A New York Times story that ran in 2001 about a homeless dog wandering around a suburban part of New York City, struck a chord with me. He was, “part German Shepherd, part something else,” and he was smart enough to find food,and win the hearts of the locals. They offered him hand-outs and cared enough about him, not to call Animal Control and risk having him picked up and sent to a shelter where his fate would be doomed.

It took nine years for my picture book, THE BLUE HOUSE DOG, (Peachtree Publishers/August 1, 2010) to come out. It’s a fictitious account of the story narrated by a young boy named Cody who lost his beloved puppy to an unexplained ailment. The boy was wounded by his loss, just as the homeless dog was wounded when his owner died. Both must learn to trust again, and the healing process is a long, slow dance that ultimately brings them together.

“Dogs find their way inside you, and you want to keep them there,” Cody says. The homeless dog, once called Bones, renamed Blue, who played a “hide and seek game” with Cody, to protect himself and stay alive, ends up at Cody’s side. “I don’t need a leash, he stays right next to me,” Cody says. At the end, the dog catcher doesn’t come to their neighborhood anymore because there are no stray dogs there anymore.

See the trailer:
http://www.youtube.com/watch?v=LloHDqJ3o5g
visit me on the web at:
www.deborahblumenthal.com

We love to hear from our readers, have something to say? Send us an email!

I am a participant in the Amazon affiliate program. This means I earn money if you shop through my affiliate links. Thanks for supporting my site!